KAOHSIUNG, TAIWAN – Media OutReach – 30 December 2020 – A
full century has elapsed since Kaohsiung’s renaming from Takao in 1920. To
commemorate this watershed moment in time, the Kaohsiung City Government has
organized a series of celebratory events across different settings and sectors.
A highlight was the grand lighting-up for Kaohsiung 100 on December 24. Next, on
New Year’s Eve, there will be live performances of different types–popular
music, artistic presentations, and performing arts–on three stages: one in the
Kaohsiung Port warehouse area, one outside the Kaohsiung Music Center, and
another on an offshore platform in Love River Bay. 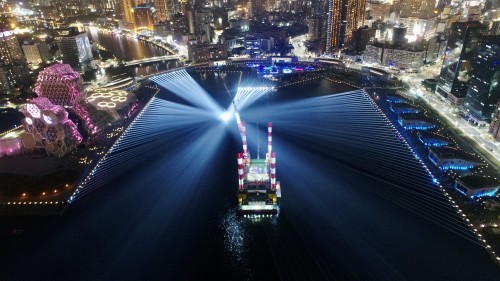 Kaohsiung Mayor Chen Chi-mai said that the
2020 New Year’s Eve celebrations, with the Kaohsiung 100 visual identity at the
center, feature rays of light going out in all directions, thereby matching the
port city’s space across sea, land, and air against its historical flow over
the course of a century. In other words, Kaohsiung is not only celebrating the
100th anniversary of its current name but also showing to the world that
its citizens have worked hand in hand to tide over an ongoing pandemic and have
the resolve to strive for a brighter future at an accelerated pace.

The development of Kaohsiung is closely
associated with Japan. In 2020, a window on Kaohsiung over the past century
takes form out of projections thrown on the walls of buildings along the Love
River. Visitors to the port city are offered a virtual time machine ride to get
glimpses of key happenings in its past. The aforesaid offshore platform is
turned into an unprecedented stage where the Kaohsiung Symphony Orchestra will
deliver a most magnificent performance. To top it off, there will be a splendid
light show put on by a fleet of drones in the sky over Love River Bay, the
starting point out of which Kaohsiung has evolved into the metropolis it is
today. Join us to light up Kaohsiung Port as we look back at the city’s past
100 years and ahead to its next 100.